Everybody’s been burned by a AAA game that didn’t deliver at some point. But would it have been better to put away your wallet, head to the bargain bin and wait for a Steam sale instead? Are expensive video games really more fun, or is it just the result of hype and a bigger marketing budget?

Using data from Steam Spy, we have found the answer.

We’ve taken a look at over 300 games released in 2016 and we’re putting the ‘fun’ back into ‘fundamental statistical errors’. Join us and discover whether a higher price tag means a better gaming experience.

What makes a video game fun is different for everybody, but the most widely-regarded measures of this nebulous concept are userscore and median hours played per person. This covers both the “it doesn’t have to have hours of gameplay to be fun” factor as well as the “get your money’s worth” factor. Quality and quantity, in other words. You don’t give a non-entertaining game a good score, and you certainly don’t play it for hours on end.

You don’t give a non-entertaining game a good score, and you certainly don’t play it for hours on end.

Popularity or number of copies sold might also be good indicators, or even current player activity, but these are unreliable metrics that could be skewed by strong marketing efforts or heavy discounts or even just free weekends, rather than actually being fun.

But that’s enough of the methodology. On to the results!

If you were hoping that all those shiny new games you’ve bought weren’t just a waste of cash, then I’ve got good news for you. Under both measurements of fun, the more you pay, the better time you have.

In the above graph, you’ll notice a statistically significant positive curve. In other words, more expensive games, on average, give you more play time. There are a few outliers, however, particularly in the middle and very end of the pay scale. Between the $20 and $40 mark, you start seeing a significant jump in playtime and, presumably, more content and/or replayability.

More expensive games, on average, give you more play time.

Below we have the score/price comparison. Perhaps even cheap games can come out on top in terms of quality? AAA titles don’t have a monopoly on great gameplay, after all. 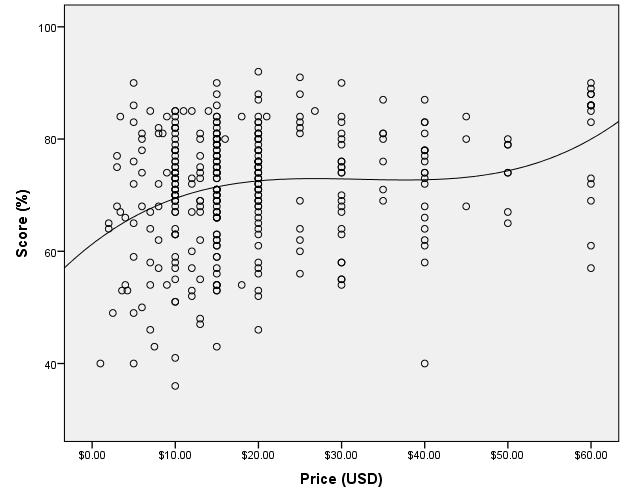 If you want a quality, high-scoring game, there is very little difference between a $20 game and a $40 game.

Once you drop into the sub-$20 realms, the experience gets noticeably worse, and past the $40 mark, it gets a lot better. The highest scoring game, if you were wondering, is a $20 game by the name of Out of the Park Baseball. Another sports game!

What’s most interesting is that between $20 — $40, both comparisons have similar-but-opposite phenomena. The gameplay time of the title goes up, but the score plateaus.

I can only think of one reason: a difference in quality between a $5 and a $60 game is obvious. But at $20 — $40, it all becomes a little less clear. Is it a high-priced indie, or a low-budget AAA? Without that clear delineation, scores stutter and stagnate.

As with all studies, there are some limitations. My original data source had thousands of games, but I had to trim them down in order to get a data set that was both valid and reliable.

There were a LOT of games in there that had exceptionally low ownership rates and median playtimes which would have skewed the results an enormous amount. I still had 341 after the cull, however, which is enough to be reasonably assured in my findings.

The biggest limitation to keep in mind is that these results will not always necessarily be true for future years—further research may be needed to compare different years, different decades and potentially different genres. Open world games and MMO releases could bloat the gameplay time, for example.

There were also significantly more games at the lower price point than at the higher, so there could be a question of volume adjusting the results. This is just an average, remember, and can’t necessarily be applied accurately to individual titles.

The score/USD graph is also quite scattered, and there is a lot of variability in the score data. Low-priced games could get very high score, or very low scores. The line-of-best-fit was quite difficult to determine as a result, but even a linear interpretation had a positive gradient. The higher the price, the higher the score—or at least more consistently high.

These limitations don’t change the conclusions; they are simply things to keep in mind before you head to the newest releases.

Here’s what we can take away from this:

Further research into different years and genres would be a great idea, but it appears that, for recent times at least, paying more does mean a better gaming experience.

Do you think more expensive games are more fun? Let us know in the comments below!